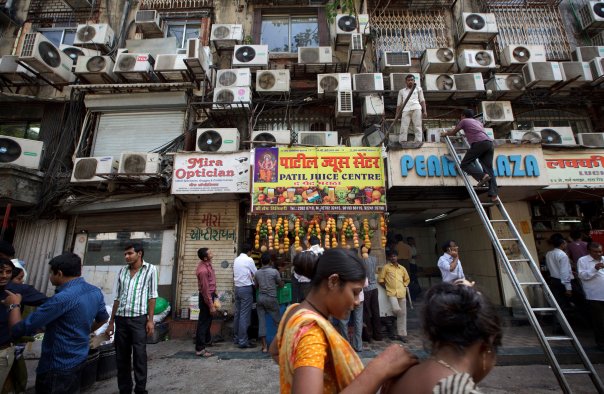 I don’t hold with those who want to blame global warming wholly on American industry and American cars.  The slashing-burning of hundreds of square miles of Amazon rain forest each day, and the air pollution in Mexico City and Beijing, show the need for a global response.

There are two principal ways human beings can reduce greenhouse gases:  (1) covering more land with green plants that will consume carbon dioxide from the air; and (2) reducing our carbon dioxide emissions.

Some simple considerations of architecture address both concerns.

(1) The view from an airplane over any large city finds hundreds of acres of bare roofs that, as they are, only absorb heat from the sun and exacerbate storm water runoff.

Green roofs can cover all that space with plants that will consume that sunlight rather than transmit it to the building below; insulate the building from both heat and cold; consume carbon dioxide from the air; provide wildlife habitat; and buffer and filter storm water runoff.

(2) As grateful as I am in the summertime for air conditioning at McDonald’s, at my church and at the shelter, in energy terms air conditioning is extremely expensive.  It costs far less to heat a room five degrees than to cool it five degrees; and that cost translates directly, watt for watt, into increased carbon dioxide emissions from fossil-fueled power plants.

We need to reverse the current trend to build structures, especially public buildings, that are completely dependent upon A.C.

The middle school where I taught (not the one pictured) was shaped like a pancake.  The dream of saved construction costs yielded a nightmare of HVAC costs.  When the A.C. failed, as several times it did, the windows we did have — around the perimeter — were completely inadequate to ventilate the building.  The result was an environment in which, for the duration, learning could not occur.

When I lived in Barclay, it was a scandal to me that the newly built elementary school nearby appeared to have no windows.

So the first step is to incorporate windows.

The second step is to incorporate intelligent fans.

On a hot day, in a public building such as a school, the air conditioning is normally turned off in the evening, when staff leave the building.  Overnight, the latent heat built up in the roof and exterior walls during the day, seeps into the inside air of the building.  By the time staff arrive in the morning, it may be like an oven inside — no matter how cool it may have been overnight outside — and must be cooled off before the children arrive.

Intelligent fans would get rid of most of that heat without incurring any cooling costs whatsoever.  A simple combination of switches will see that, overnight, so long as the air outside is cooler than the air inside, hot inside air will be vented and cool outside, night air will be brought in.

We human beings love our A.C.  So long as we continue using it wantonly, we enigmatically make the whole global warming problem worse.  Here are some simple ways we can do better.